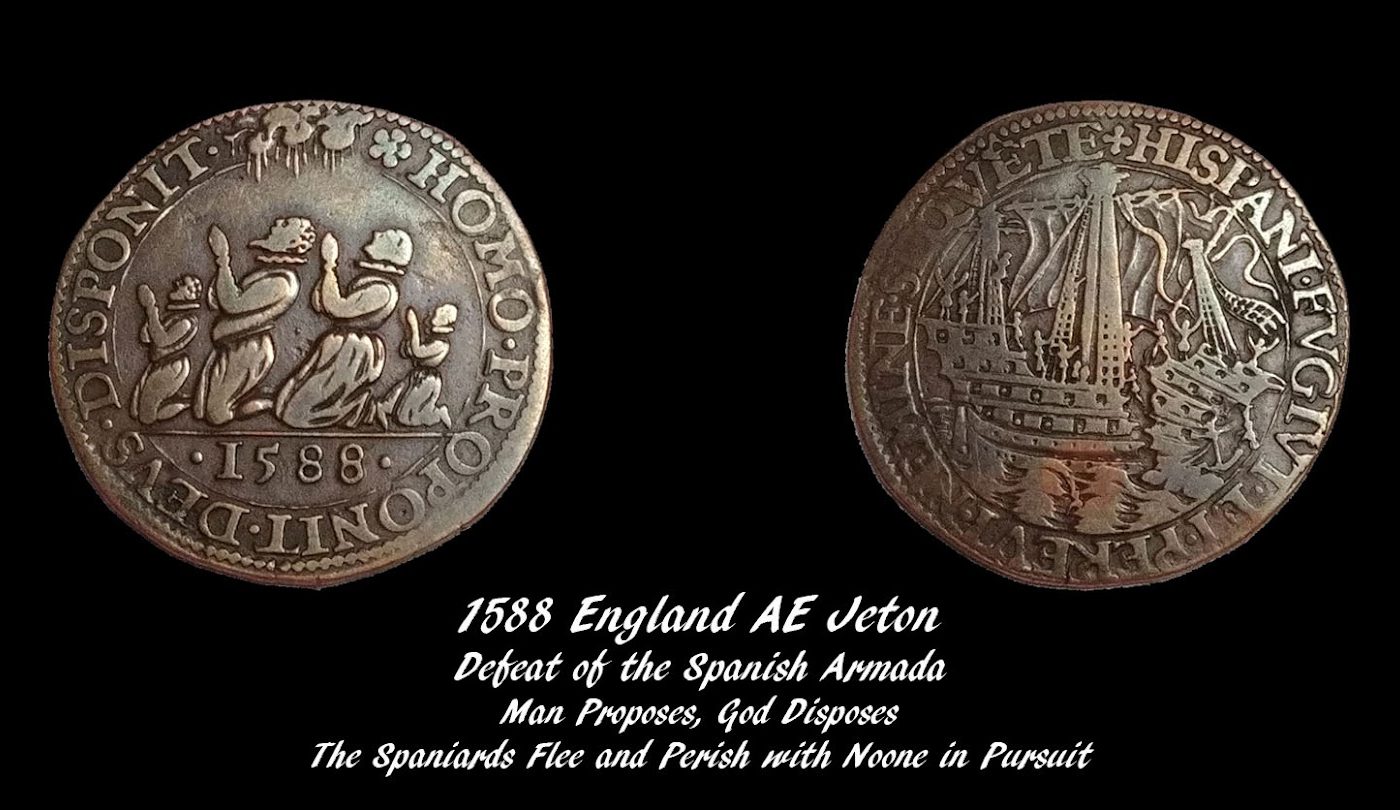 1588 Jeton – Sinking of the Spanish Armada

The phrase “God Save the Queen” (or King) has long been significant in English history, originating during the reign of George II. Before that however, there was an event that made some say that God saved the whole of England itself.

During the summer of 1588, the protestant government of england was under threat, with an imminent invasion by King Philip II of Spain looming on the horizon. Spurred by England’s support of Dutch rebels, English piracy, and the desire for a Catholic king, King Philip assembled an “invincible” armada to achieve his goals. King Philip was a man who thought he held valid claims to the english throne, through his marriage to the late Queen Mary, the queen before Elizabeth I.

Taking over two years to fully build his navy, King Philip II collected material and weapons from all over Europe. Once ready, his fleet stood at 130 ships, 8000 seamen and over 18,000 soldiers. Such was the confidence of the king that he sent over 200 men, to set up a temporary government once England was defeated. Commanded by the inexperienced Duke of Medina Sidonia, the armada set sail during May, 1588. While en route to rendezvous with the Duke of Parma off the coast of France, the Invincible Armada was being harassed by a smaller English fleet. After a fireship attack by the English that left the Spanish scattered, the final battle would take place. At the Battle of Gravelines, the English navy bombarded their enemies with cannon fire. The bloody engagement lasted nine hours, until winds carried the Spanish navy into the North Sea, dashing any hope of a successful invasion. This English victory would mark the last time England itself was threatened with foreign invasion, all the way until the World Wars.

This miracle is reflected in this Jeton, with the obverse depicting a protestant family praying to god, presumably for the annihilation of the invading forces. This conflict was a religious one as well; King Philip II and the Spaniards were of the Catholic faith, while Queen Elizabeth I and the English were Protestants. Philip II’s wife, Queen Mary even gained the nickname “Bloody Mary” through her relentless persecution of Protestants in an attempt to revert England back to Catholicism. The portrait of the praying family depicts the common belief in England, that God himself has willed the Protestants to victory.

The legends on the coin are fascinating as well. On the obverse, the legend read “HOMO PROPONIT DEVS DISPONIT”, latin for: Man proposes, God disposes. Once again, this legend reflects the religious beliefs of the English at the time. On the reverse, the legends transition to a description of the great victory. A spanish warship is depicted crashing into jagged rocks, with the sailors leaping into the waves below. Around this caricature reads the legend “HISPANI FVGIVT ET PEREVT NEMINE SEQVETE”, roughly translating to The Spaniards are Put to Flight and Perish with Noone in Pursuit.

Coinage has long been valuable propaganda pieces for ancient rulers, depicting great achievements in their reign. This Jeton is no different; depicting a significant victory for Queen Elizabeth I, a victory that would secure her throne and her place in the great monarchs of English history.
England, 1558. AE Jeton (29mm, 4.96g). Defeat of the Spanish Armada. HOMO · PROPONIT · DEVS · DISPONIT · (Man proposes; God disposes), family kneeling kneeling left in prayer; HISPANI · FVGIVT · ET · PEREV’T · NEMINE · SEQVETE (The Spaniards are put to flight and perish with noone in pursuit), Spanish ship splitting, with soldiers jumping overboard.